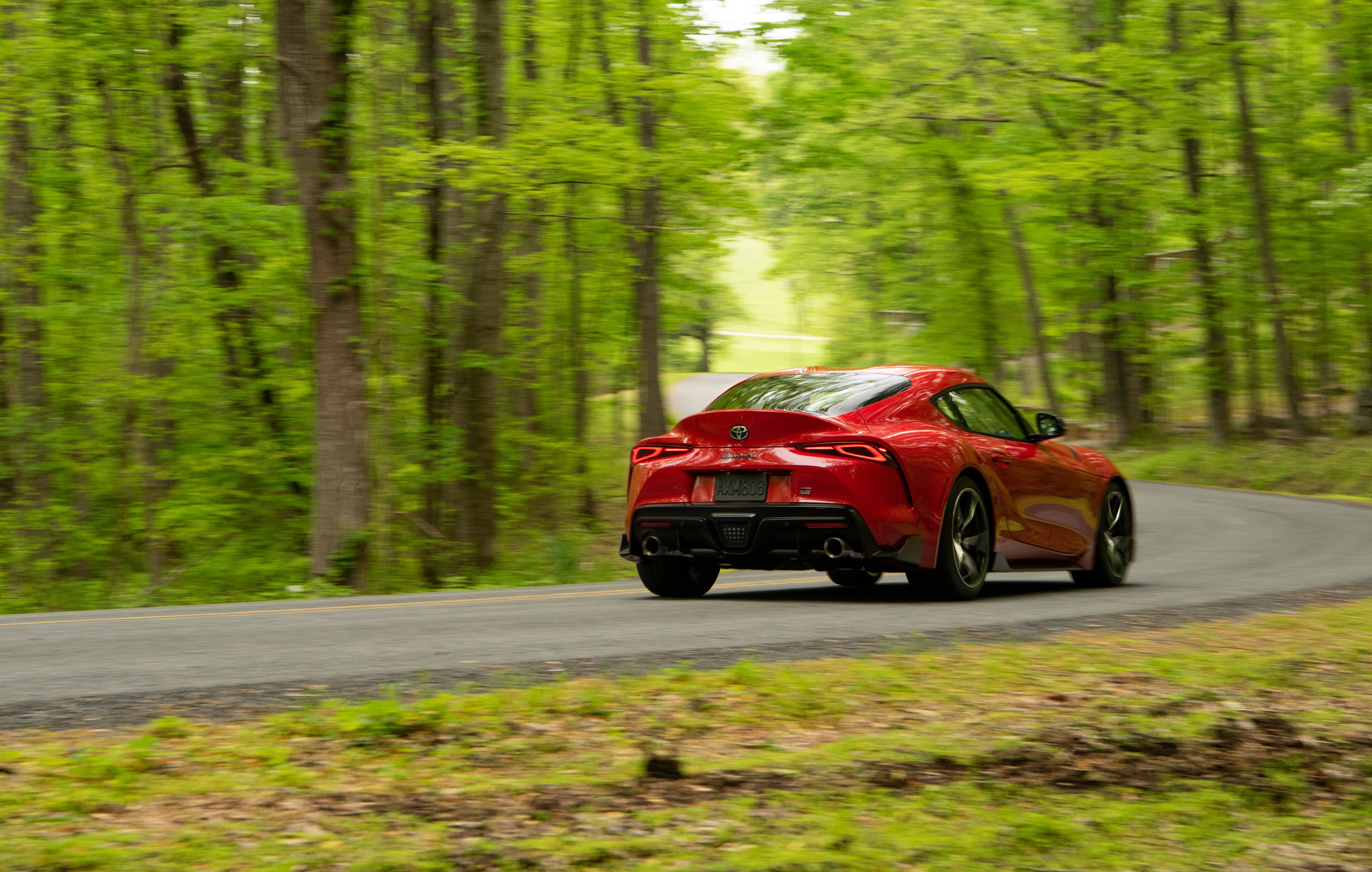 We're now able to quantify our recent positive tingles from our first time behind the wheel of a production 2020 Toyota Supra. We drove one back to our office from Toyota's launch event at Summit Point Motorsports Park in West Virginia and have now had the chance to run our full gamut of performance tests on it.

In short, the fifth-generation Supra is quick—even quicker than anticipated, hauling to 60 mph in just 3.8 seconds and steamrolling through the quarter-mile in 12.3 seconds at 113 mph. Our best runs involved a light dollop of brake torquing to get engine revs off idle and then carefully applying the gas pedal to avoid excessive wheelspin. The launch-control program, which was inconsistent in its engagement, was considerably slower.

These acceleration times stack up favorably against some bigger, pricier guns, nearly hanging with a Chevy Corvette or a Porsche Cayman GTS through the quarter-mile and slightly outaccelerating the BMW M2 Competition and the Ford Mustang Shelby GT350. This doesn't come as much of a surprise, given that it is based on BMW componentry, but the revived Supra follows in the BMW tradition of delivering far better performance than its claimed power, and thus power-to-weight ratio, would suggest. For example, at 10.1 pounds per horsepower, the Supra outaccelerates the Chevrolet Camaro SS 1LE, which has 120 more horsepower, each of which is only taxed with 8.2 pounds. It's less a question of whether or not the Supra's 335-hp inline-six is underrated, and more about how much. Unfortunately, we have yet to test a BMW Z4 M40i to see how close the Supra is to the more powerful, "382-hp" six-cylinder Z4.

Although the horsepower rating is only 15 hp higher, the new Supra is quite a bit quicker than the revered Mark IV Supra Turbo from the mid-1990s, and—shockingly in today's world of almost always larger and heavier—108 pounds lighter, aided by its trimmer dimensions and lack of a rear seat. Our Renaissance Red test car weighed 3372 pounds, which is, impressively, a bit lighter than Toyota's claimed curb weight despite the fact that ours was a loaded Premium model, which pushed the as-tested price to $56,115.

However, Toyota hasn't divulged the coefficient of drag figure, and we'd guess by the way the Supra's high-speed acceleration tapers off that it isn't class-leading (all the fake vents probably don't help, but they would hurt more if they were real). By 100 mph, the Supra falls behind the Camaro SS 1LE and the M2, and, by 150 mph, the Supra is trailing those two by 1.5 and 3.2 seconds, respectively.

Despite wearing modestly sized Michelin Pilot Super Sport tires—that, yes, are branded with BMW's star (★) designation—the Supra averaged a heroic 1.07 g on the skidpad. That hangs with just about anything not wearing DOT-approved track tires like the Michelin Pilot Sport Cup 2 or Pirelli P Zero Corsas, and slightly better than the current top-dog Cayman GTS and BMW M2. Braking performance from 70 mph came in at a solidly impressive 148 feet, right in line with the front-engine competition, although the slightly front-biased Supra (51.5/48.5 percent front/rear) can't hang with the rear-biased Porsche Cayman or Boxster.

Welcome back, Supra. You've been missed.